On a typical day when I’m in town, I am usually out of my office between 6:15 and 7pm.  We all have our after work routines (I would think).  Mine consist of first changing into my gym clothes, feeding my dogs and turning “The Big Bang Theory” (reruns) on at 7pm.

I was never into the show when it was live, but for some reason I now find it’s dry humor to be quite hilarious.

One evening I was watching and Sheldon, the main character (in the event you’ve never seen it), was doing this segment “Fun with Maps”.  The whole thing is rather silly however, I immediately started thinking about what if I did a segment called “Fun with Feet”?

My first thought was to do a weekly “Fun with Feet” vlog.  NOT!  Just can’t commit first of all to  (another) weekly commitment AND, I am no where near the likes of Mike Baxter (Tim Allen) of “Last Man Standing”

So, with all the imagination I could muster up, I decided to write a “Fun with Feet” blog.  Who knows, maybe eventually this could turn into…nahhh probably not.

The feet industry is so serious, (as it should be).  However, there is a whole history of feet stories, feet chronicles that can be quite alarming, quite funny and actually quite educational.

To begin with.  Did you know “according to the Family Tree.com”, learning your DNA of earlier heritage is as simple as looking at your feet and toes?

Although this theory has not been scientifically proven,  these “Fun with Feet” facts I bet made you look down.

Foot-binding was a practice first carried out on young girls in Tang Dynasty China to restrict their normal growth and make their feet as small as possible.  Apparently this was just one way to distinguish the poor from the wealthy.  This practice more shockingly, continued right up until the 20th century.

The process was such that the big toe was left facing forwards while the four smaller toes were bent under the foot. In this position, the feet were tightly bound using long strips of cloth, which then restricted any future growth and gave the foot a pronounced arch.

The feet were then unbound after one month, any ulcerations of the skin treated, and the foot rebound again. The bindings were loosened and retightened each month until the girl reached her early teens (or even longer depending on the desired effect).

It was not uncommon for one or more toes to be lost or to have infections in the foot or gangrene. Even as an adult a woman continued to wrap her deformed feet in bindings, wearing them at all times in public and when bathing.

If that’s not amazing enough., this process began when the female was 5-8 years old.

THE GOAL OF THIS LONG & EXCRUCIATING PROCESS WAS TO HAVE FEET NO LONGER THAN 7.5-10 CM.

AT THIS POINT, THEY WERE KNOWN AS “GOLDEN LOTUS”.

The history of caring for feet begins in the ancient past. The first pedicure textbook was published in Paris in 1762 by the Royal surgeon Rousselot.

In the early 20 century, William Scholl (1882-1968) began offering pedicures to the public as well.  It quickly caught on. In Czechoslovakia, J. A. Baťa began a drive for healthy feet of his customers in the late 1920.

What’s interesting, even back then it is stated that “Theoretically, there should have been a trained pedicurist in every Baťa store to advise customers on foot health.”

It wasn’t until after the war, Kocourek published a textbook Theory and practice of pedicure(1956). 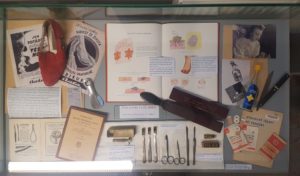 This exhibit in the NML Medical Museum presents the history of Czechoslovak pedicure from the show factory owner J. A. Baťa and the “Baťa pedicurist”. The museum holds many tools, instruments and books on the history of the care for the feet. The exhibit shows 1930s corn planes manufactured and used in Czechoslovakia, scissors, razors and tinctures or the “Fix-Nix” paste for chemical removal of bunions and corns.

HOW COOL WOULD IT BE TO SEE THAT?

6 thoughts on “Fun with Feet”

For all of the latest educational information, classes, news, and deals on our Professional Foot Care products,  be sure to sign up for our newsletter!  Don’t miss the opportunity to hear of our Free Freight Friday offered monthly with our monthly BONUS specials.  You can opt out at any time.
Click here to sign up
(c) 2022 Centre for Beauty – Privacy Policy – Designed by Kaze Media
Articles – News
Facebook Twitter Linkedin Youtube

GET 10% OFF Your next Order

For all of the latest educational information, classes, news, and deals on our Professional Foot Care products,  be sure to sign up for our newsletter!  Don’t miss the opportunity to hear of our Free Freight Friday offered monthly with our monthly BONUS specials.  You can opt out at any time.
Click here to sign up